Kings and  queens are in a lot of fairytales. Hans Christian Andersen, who wrote many fairytales but the more modern tradition than all the stories that are part of oral storytelling traditions, was is the inspiration for working in the medium of papercutting. He made thousands of papercuts as he spun stories. We're glad he also wrote down his stories. Disney has made many of his stories into movies.
HCAndersen wrote The Snow Queen, (which inspired Frozen), The Little Mermaid, The Ugly Duckling. Also The Emperor's New Clothes, and The Princess and the Pea.

Today we tried to correct my complete miscounting of how many royals we could make in our paperdoll chain. We wound up with four figures. We had to cut one of the half figures on the end and tape it to its matching half on the other end.

A five year old came to class today. I think she made two little books rather than the papercutting. And then we had some fun with my taking exact dictation so she could copy her dictation. She wrote her sentences in different colors. Yellow is not a color  I can easily read. I'm glad she only wrote the last sentence in yellow! 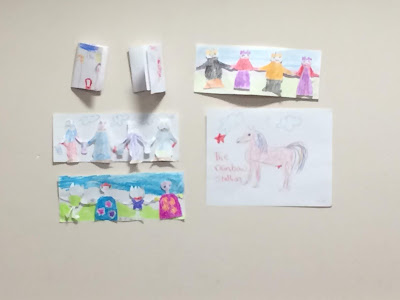 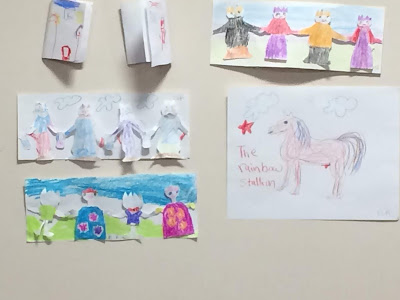