Press Release:
Rockland -  Children will draw winter animals and scenes this January,
at Rockland Public Library's ongoing drawing workshops led by artist
Catinka Knoth. Participants draw and create along with Knoth as she demonstrates how to convey a variety of subjects. Winter subjects may include arctic animals such as snowflakes, polar bears, snowy owls, hares, and foxes; houses in a snowy landscape, and winter sports. Each week is a different focus.

Wendy and Keith Wellin sponsor the workshops, which are free and open to the public, with all materials provided, and geared for age 6 and up, Knoth expects participants to be able to work independently for the most part. Library policy is that children age 10 and under  be accompanied by an adult. Classes meet every Tuesday, 4-5 pm, in the
Community Room, Rockland Public Library, 80 Union St. The Friends of
Rockland Library host.  FMI - Jean Young, children's librarian, 594-0310. 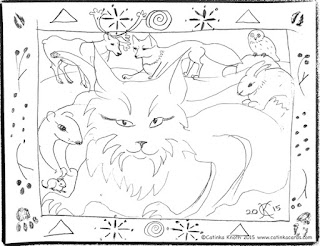 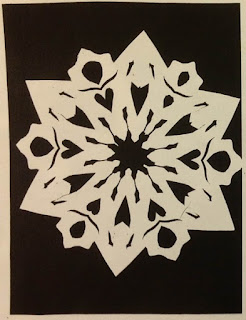 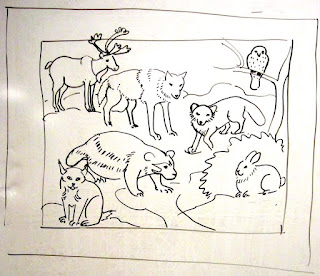 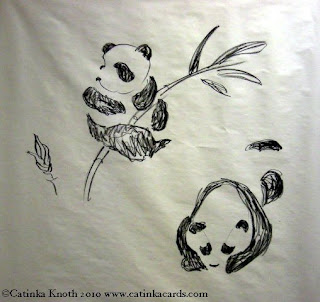 Posted by Catinka Knoth at 7:56 AM No comments: 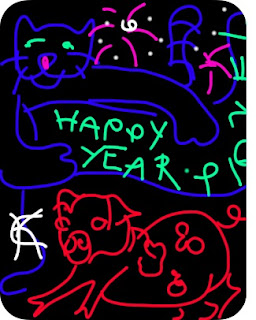 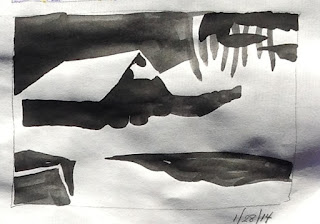 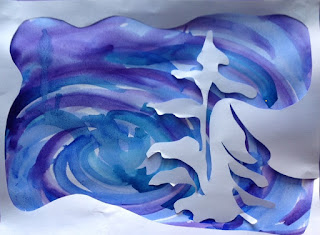 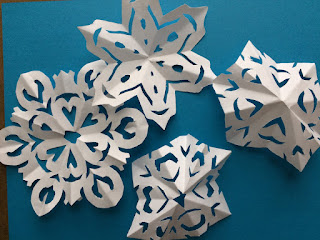 on creating scenes such as evergreen trees in snow, lacy snow covered

branches,  buildings in a snowy landscape, winter animals, and winter

sports. Each week will be a different subject. Classes meet 11 a.m.  Most Mondays, January 7, 14, and 28th at the Community Room, Rockland Public Library, 80 Union St.  (The library is closed January 21, for  Martin Luther King Day.) Led by Knoth, participants will  create their own

winter art. Each week is a different subject. Knoth provides the  classes  free of charge, with materials supplied. Friends of Rockland

1/07   Evergreens in snow and papercuts

Knoth will provide instruction and guidance in drawing and creating winter scenes of January.  Participants will work with pencil, colored

pencil,  crayon, and sometimes papercutting, with a focus on drawing in color.

Knoth creates watercolors of Maine and whimsical animal scenes, which

she offers as cards and prints. She teaches a free weekly children's drawing class at Rockland Public Library, sponsored by Wendy and Keith

Posted by Catinka Knoth at 4:34 AM No comments: 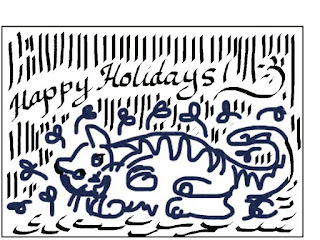 Finally a reply from L on the drawings iMessage thread:
"Please take me off this message stream!!!!! I'm fucking trying to sleereeerp !!!!!!!!"

Sorry this had not been clarified before. I started this iMessages thread because I thought it was time that I check in somewhere on a daily basis. It became obvious that that was not going to work. I didn't know whom I was bothering or not. But I liked that I could use those live drawings. They don't work in any other format. I had also liked the idea of trying to make an Advent calendar - a different drawing for each day of Advent. I had written up a list of lots of ideas to draw from, to draw. And I had already gotten started on these. When it became obvious that it wasn't really interesting anyone else, I felt a little bit sad because this had been a good motivator for me to do this early in the morning. It got me up in the morning early to be able to do it. But I knew already this would not be sustainable. And yes I was doing it for myself so that I could watch the drawings live. My student who is part of that text message chain which is very small just for five people, almost always responded. I knew from one sister, C, that she liked them though she could not always respond. I presumed that the other sister was seeing them but also could not always respond. I just assumed that L  had set up a place for these iMessages to go so they wouldn't bother him. I assumed there had to be a way to shut off notifications for them.
I was far enough into them that I was not going to stop then. I did periodic email messages of the drawings in final form to family and friends. I made blog posts of almost each day's drawings. And I had decided that that was how I was going to have to do it - by blogging these drawings. Even there the daily grind of it did not seem sustainable. But I was just going to see how far i might be able to take it. And then word came in from some people that they were enjoying the emails. Other people on the email list I had no idea about whether this was a nuisance or what. But I wasn't sending these out as daily emails either. And I could not see why people would like them in their final form. To me the fun of it was seeing them as they're drawn especially those tiny ones!

So last night at midnight
came the blowup of  "take me off the list I am fucking".... blah blah blah.
I googled to learn whether there is a way to customize one's imsg notifications. Yes, plenty...
Just google the question!

Post Note: turns out individual's notifications settings got thrown out of whack. I was suddenly sending this to 5 instead of 4, and late at night instead of early morning. I also input names one by one rather than by group.

Posted by Catinka Knoth at 1:08 PM No comments: 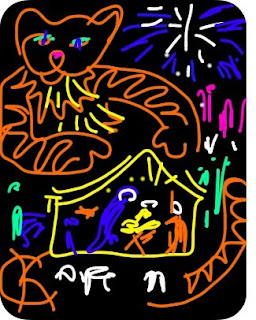 Posted by Catinka Knoth at 12:03 AM No comments: 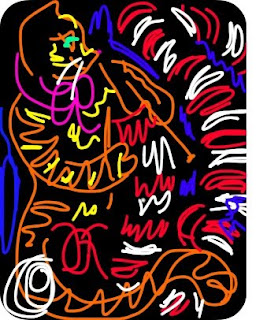 There was a time we all had these red and white striped scarves! I think there were black and white and blue and white ones too. Good for the peppermints of Christmas.
Posted by Catinka Knoth at 8:02 PM No comments:

Cat glories at the return of the sun, the Winter Solstice. Mini digital phone drawings, 12/21/18 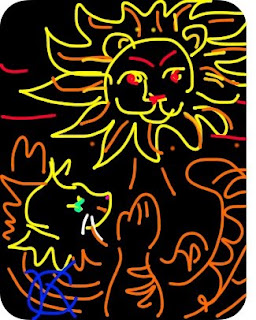 Seems like a miracle that we made it - the sun will return after today!
Posted by Catinka Knoth at 12:26 PM No comments:

Cat has cookies and milk
for when Santa comes round
Santa loves what he's found,
And makes not a sound
As he packs them away by the pound! 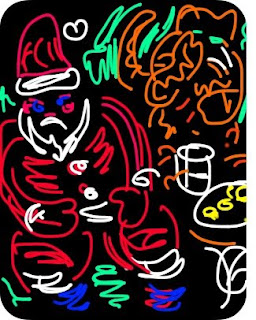 Posted by Catinka Knoth at 8:07 AM No comments: 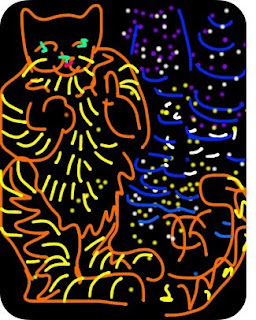 Wonderful magical light displays they do now. Like still fireworks that last for a few weeks instead of a few minutes. In the quiet of the still cold nights. A good thing about winter - one can see further!
Posted by Catinka Knoth at 6:19 AM No comments: Good that Cat does this now. In Maine lots of people throw the tree away on Christmas Day!

Cat puts up the tree,
With ornaments & ribbons
for all to see,
Soon there'll be cookies & tea
But this is enough for me
and for thee,
Til Cat has done with
the decorating spree!
Posted by Catinka Knoth at 7:52 AM No comments: 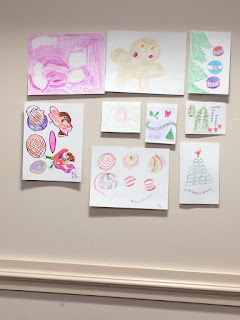 We did practices for using lines just to imagine and develop the feel of the physical spherical form rather than just trying to make it 'look' like the form. It ends up 'looking' more like the form if you can imagine it or pretend it. One of these works is such a practice sheet.
Posted by Catinka Knoth at 4:36 PM No comments: 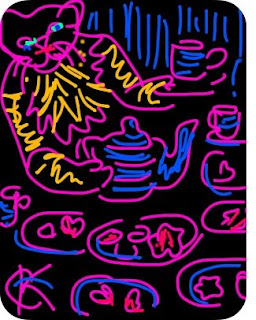 Cat makes cookies and tea,Plenty for you and  for me!It's quarter to three.The sun may peek from the tree, Or go down to the sea.But we'll have cookies and tea! - CK
Posted by Catinka Knoth at 9:24 AM No comments: 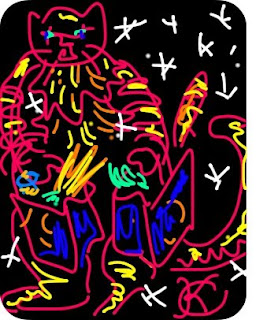 Cat will have to decide where the toys go - whether to keep the toys or help Santa.

Posted by Catinka Knoth at 7:53 AM No comments: 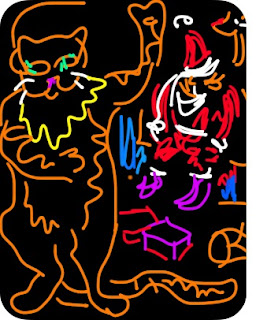 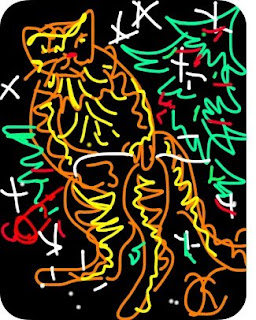 Cat brings home the Christmas tree. Might be snowing too.

Cat has found a tree,
To fill us  with glee.
Will put up for others to see.
In time for some cookies & tea.
Posted by Catinka Knoth at 10:03 AM No comments: 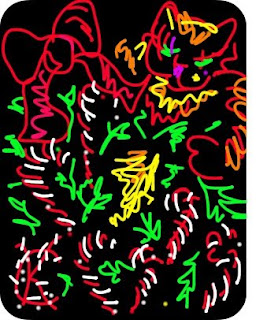 Peppermint candy canes are very sweet,
And pretty in red and white.
Cat thinks they'll be quite a treat,
And hopes they make a fine delight!
Posted by Catinka Knoth at 6:59 AM No comments: 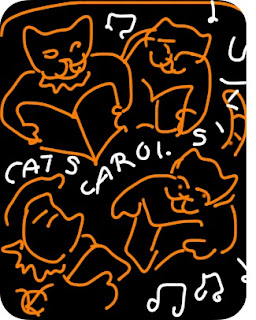 You may have heard them out there! This is a friendly group though!
Posted by Catinka Knoth at 7:37 AM No comments: 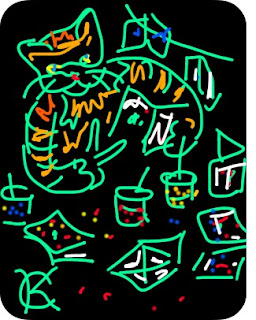 Glitter, glue, scissors - what else do cats need for making Christmas cards?
Posted by Catinka Knoth at 6:14 AM No comments: 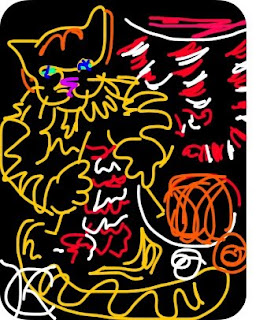 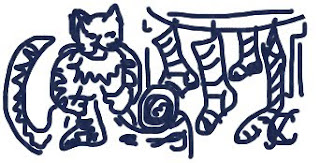 So far this cat has not gotten tangled. It is staying on task, cattedly working on these stockings.
Posted by Catinka Knoth at 7:26 AM No comments: 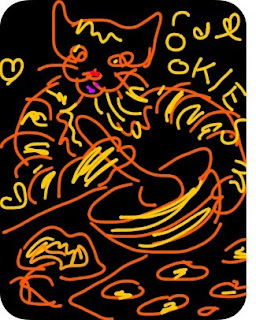 Advent preparation continues as the cat mixes up a storm. It has some hearts and circles rolled out.
Posted by Catinka Knoth at 7:02 AM No comments: 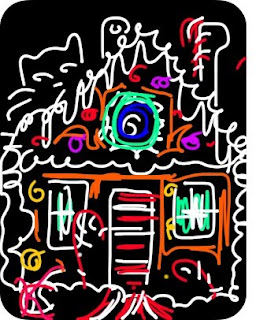 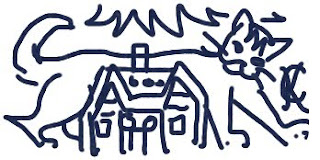 Hopefully the cat decides there is nothing to its tastes here. Just to look at anyway! And who might be inside?
We like to imagine ourselves being surrounded by all those treats, from which we can nibble forever, or at least dream of such possibilities...
Posted by Catinka Knoth at 8:07 AM No comments: