The cat who flew in the nighttime sky
Was always given to wondering why.
Why were the stars so big and so bright?
Why did they only come out at night?

Why did the moon seem round as a ball
one could bounce down the hall?

Some nights it hung like a C,
With even a place for a hat,
He was sure this was C for Cat,
But where were the A and the T?

Sometimes it wasn't there at all,
as if it had taken a fall.

But it always came back again,
Though maybe not til half past ten.

And,
Who was the man in the moon?

Could he sing us a merry fast tune?
Could he tap out a march with a spoon?
Did he have lunch at noon?
Did he come out in June?

Could he see us from way up there,
With his great big stare,
And only his face,
In that faraway place?

The cat with his head full of why,
Took one last look with a sigh,
Before going off to his bed
Where he lay down his head,
"Aahhh!" said the cat,
"And that is that!"

Here is my illustration from a long time ago, for my little unfinished book idea, as a 5x7" greeting card available at Greeting Card Universe. I think this has a customizable greeting. ( I do make a small commission from cards ordered through GCU. ) I'll add details another time on ordering cards direct from me.

Posted by Catinka Knoth at 9:01 PM No comments: 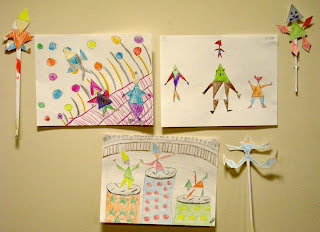 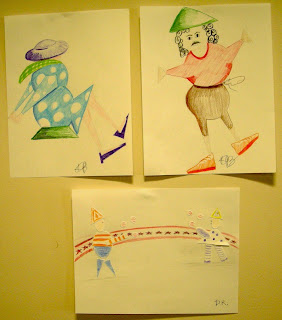 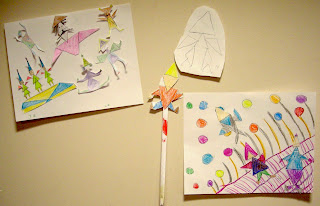 Circus Acrobats & Clowns, set #1 & 2, adults & kids, children's drawing class, 3/24/15. We each created four figures by drawing freehand triangles as figures. We colored them, cut them out. We stuck paper straw type sticks to the back of one of the figures to turn it into a puppet. The other three figures we arranged and stuck with a dab of glue onto full sheets of paper. Those who had time drew a background.

Circus figures, adult art class, 3/23/15. We cut out a variety of rectangles, triangles, and circles. We arranged these into figures, tracing around each on a new sheet of paper. Color as desired.

Posted by Catinka Knoth at 10:02 PM No comments:

"What's for dinner?" Why I rarely need to ask, (myself), anymore. 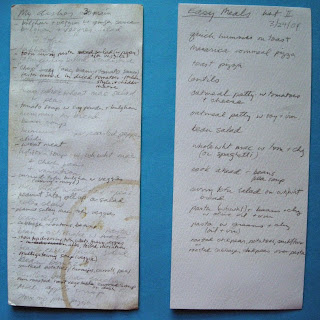 The question posed on FB the other day wanted to know of people's experiences with food vacuum sealers. The poster wanted to cook meals way in advance to solve the "What's for dinner?" question. I gave my long piece of advice on how I'd solved that problem years ago. It used to be such a problem, until I did this.

Below is my comment to part of the question. The poster was probably looking for confirmation of the desire to use a vacuum sealer. Of course - it was not a question of "What's for dinner?". It was a question of "What is your experience with a vacuum sealer?". At least I got to write this up, out of place and uncalled for advice that it was. I also dug out the two actual lists. The first is so well worn, not because I used it a lot, but because it sat so long on the kitchen table in the line of spills and spatters. After that first week or so I had no more need of it. The meals eventually expanded into another set, those in the second list, of 2004. It is time to write another list. The inventions now change constantly, always evolving.

My 'what's for dinner' solution, tho it was only me asking myself, has worked perfectly. Sit down and write a list on sturdy paper, of any dish you can think of that you know you like and that is easy to make. In my case I had to be able to put them together very fast (10-15 min prep with somewhat unwatched cooking time). Every day just look at the list to see what you might want to cook, what you feel up to cooking. Then cook! You always know you will like it.

Add to the list as you wish. I stopped needing or using it after a week and have loved making dinner for myself ever since. Deciding is never an issue - well a little because I want any of these dishes. And I also improvise a little as I go along. Use lots of frozen veggies that you can mix n match. Keep lots of the components for the meals in the freezer. This way you are choosing from things you know you like and that inspire you to cook. Looking at your larder n fridge can get you uninspired, (unless that is what gets you wanting to cook). If it is the others who have the problem w the question of 'What's for dinner?', that is another issue!

Every once in a while I pull out the old list just to look at it fondly. It feels good to see this bunch of ideas collected on this paper. Can't remember when this started!
(The comment written Mar 15 at 3:12pm)

And these are the original two lists.

Posted by Catinka Knoth at 1:01 AM No comments: 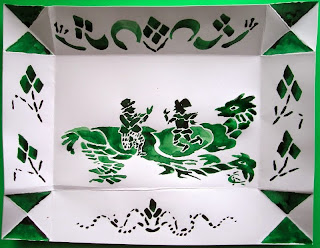 Freehand watercolor, 'stencil' style, CK, 3/17/15It is such fun to paint this way. The paint is like liquid jewels as it flows off the brush and onto the paper. The design just develops as you go. No idea ahead of time. Started by folding an equal bordered frame that uses square folds in the corners  as a measure. Decorate that. Then paint something of more presence in the large central panel. Most of the ornamentation in the frame is basic calligraphy strokes, but painted with a 1/2" sign/lettering brush, (called a one-stroke).
------------------
Catinka Knoth
241 Broadway, Apt B
Rockland, ME 04841
207-596-0069 or 207 691-5544

My blog:
http://catinkacards.tripod.com/cknotes/
Posted by Catinka Knoth at 3:41 PM No comments: 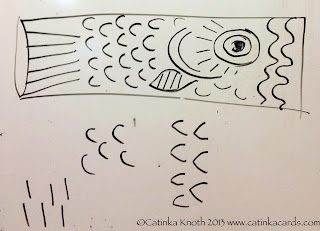 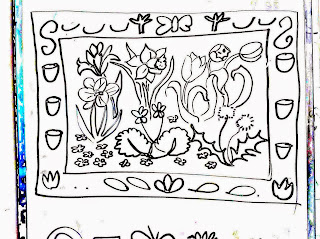 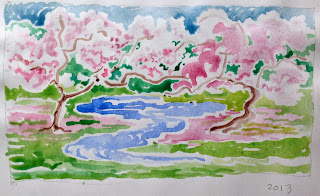 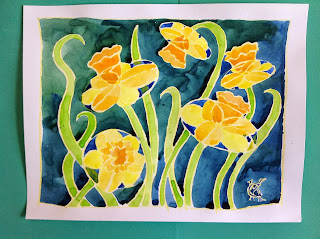 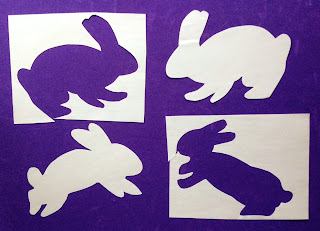 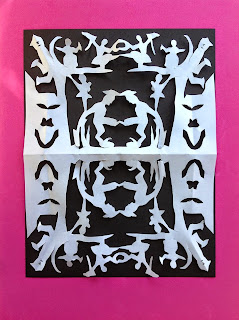 Press Release:
Free April Art Workshops for Adults, with Catinka Knoth, at Rockland Library, 2015Rockland - Catinka Knoth  will lead a drawing workshop series foradults, on creating 'April Art'.  Attendees will explore themes such asSpring and fairytale papercuts in celebration of Hans Christian Andersen's birthday; cherry trees and the Cherry Blossom Festival; and spring flowers. Classes meet 11 a.m. Mondays, April 6, 13, and 27th, (the Library closes for Patriots Day, 4/20/15); in the Community Room, Rockland PublicLibrary, 80 Union St.  Led by Knoth, participants will  create theirown art. Knoth provides the classes free of charge, with materialssupplied. Friends of Rockland Library host the workshops, which areopen to the public. FMI Knoth at 596-0069 or Rockland Library at594-0310.4/06    Spring & fairytale papercuts4/13    Cherry trees and the Cherry Blossom Festival 4/20    No Class - Library  closed for Patriots' Day4/27    Spring Flowers - Tulips & DaffodilsKnoth will provide instruction and guidance in drawing and creating theApril themes. Each week is a different subject. Participants will workwith pencil, colored pencil, and crayon, and sometimes scissors, with afocus on drawing in color.Knoth paints watercolors of Maine and whimsical animal scenes, whichshe offers as cards and prints. She also teaches a free weeklychildren's drawing class, at Rockland Public Library, with the sponsorship of Wendy and Keith Wellin. For more information about Knoth's workvisit www.catinkacards.com.Attachments: Art/photos by Catinka Knoth
-----------------
Catinka Knoth
241 Broadway, Apt B
Rockland, ME 04841
207-596-0069 or 207 691-5544

Posted by Catinka Knoth at 7:07 PM No comments: 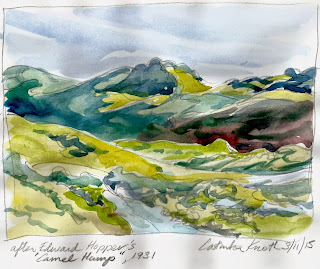 Posted by Catinka Knoth at 3:17 PM No comments:

My watercolor of Hopper's "Camel's Hump", 1931, for the annual greens landscape lesson 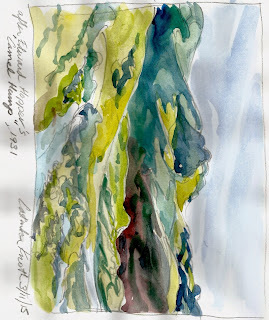 St. Patrick's Day is the perfect time to explore greens. Play around with yellows, blues, and greens. Make a chart of overlapping layers of your colors. Label them as you go. If you have no name in your palette, then use its position on the palette. Think of how many different ways you can paint these colors. Lightly or heavily. Paint should be juicy like an ink, not thick like acrylics or poster paints.

This is from Edward Hopper's painting, "The Camel's Hump", 1931, a Vermont scene. My painting started with a quick underdrawing. Instead of redrawing, I  made a couple copies of the drawing and painted on one of those. The lighter yellows and greens went down first, then the darker greens, blues, and purples.

Posted by Catinka Knoth at 1:57 AM No comments: 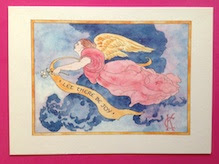 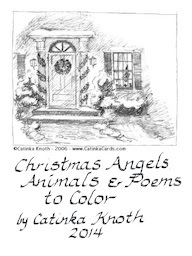 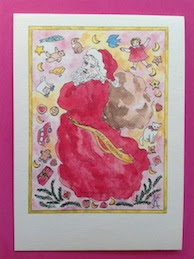