Mr. Squirrel and the end of the summer, a squirrel story.

Mr. Squirrel and the end of the summer.

Mr. Squirrel could not help but overhear the car radio playing in the parking lot while the driver prepared to leave the car. It seemed to tell of the possibility of dinosaurs on other planets and the supposition of why it would be dinosaurs there instead of people. Squirrel could not imagine anything so big as a dinosaur supposedly was. Squirrel wondered, "Why did it need to be dinosaurs OR people? Why couldn't it be both on a planet? He thought the radio show also seemed to say it was a fluke or an accident that there were people on earth instead of the dinosaurs that had been on earth. He had never paid much attention to what they said was the reason for that. What was the fluke that happened to the dinosaurs that they had disappeared from the earth?

Squirrel wondered how he would be able to exist if there was something as big as a dinosaur on earth. How would it, or they, ever find enough food to eat? Was food much bigger than it was now? Maybe that did not matter. Did the dinosaurs like to eat all the green things around them? Maybe there were a lot less dinosaurs than the regular animals that lived nowadays.

"Such a big animal...could it move quickly enough to be able to catch smaller animals as food?" Squirrel wondered. He thought it would have to be a vegetarian or a herbivore because it could not move quickly enough to catch little animals. It certainly could not scamper up and down thin tree branches and twigs the way Squirrel could. Squirrel loved running up and down around the trees and sometimes taking a flying leap into the air to land on something fairly far away. He might have to swing back and forth a bit before he could move on to the next branch. Sometimes he would go out on a branch that would bend low enough for Squirrel to jump onto a rooftop. But then that branch would spring back to its usual spot and Squirrel would have to take a daring leap up back onto that branch just in order to get off the rooftop. He never knew if he would make it back to the branch. He just might miss the branch and tumble to the ground. Squirrel was like an acrobat on a trapeze. He loved to throw himself into the air and feel like he was flying for a moment. He was not like his cousin the flying squirrel. Flying squirrel had extra skin between his arms and legs so that he could really sail thru the air like a kite. He might catch an updraft and even ride it a bit longer than just jumping from one branch to another.

Squirrel wondered more about his cousin Flying Squirrel. Where did he like to live? He had lost touch with his cousin. He should find out where he was now. It was a long time since they had seen each other. When was the last time they met? The woodland animals had had a big picnic one year at the end of the summer. The had all gathered from far and wide to be there. Squirrel and Flying Squirrel were quite young then. Squirrel had met a lot of the other cousins too, like Red Squirrel and Black Squirrel.

Black Squirrel had velvety black fur and looked just like Squirrel. He lived in a city. Red Squirrel was smaller, his fur a reddish color like a deer or an Irish setter dog. His ears were bigger with long tufts of fur. He lived in the same woods that Squirrel did. They saw each other a lot as they went about their business.

Squirrel started thinking how nice it would be to have another picnic like that at the end of this summer. It would be nice to gather with all the other animals, and especially to see the relatives again. They could have such fun having a feast together, playing games, and sharing stories about where they lived.

The summer was almost over. There might be just enough time left to make a picnic happen. What would Squirrel have to do? What was the most important thing that a picnic needed? Squirrel would have to get the word out to everyone. He could go to his flying friends, the birds, and ask them to help spread the word. Everyone could bring their own food, the food they liked the best. There was still lots of food around at the end of the summer. Some of it was not yet ready for picking. Apples and nuts were ready. Lots of woodland animals liked that kind of food.

Squirrel went to tell his friend Rabbit and Frog about the picnic. He wanted them to organize the games. Frog agreed to run a game of leapfrog. Rabbit would hold an egg and spoon race, and a gunny sack race. And they had to hold a tug-of-war too!

Squirrel went to sleep dreaming about the picnic. In his dream he ran into lots of friends and relatives. Everyone was so happy to see each other. They told each other the news from where they lived. Who had married whom. Who had made families. Who had died. Lots of stories. When Squirrel got up in the morning he was so excited about the picnic plans. He could hardly wait for the day when he would really see every one.

The next day he saw Bluejay. Bluejay had had the same dream. As they went about their day they learned that lots of their friends had had this dream. Everyone was talking about the picnic. They could hardly wait for picnic day.

Finally it was picnic day. All the animals gathered in the meadow by the edge of the woods. They spread out their foods and set up their games. It was a lovely day, still summer, warm, sunny, and breezy. Everyone was having a lovely day. It was just like in their dreams.

Suddenly one of the young bluejays squawked out at something it saw rising from the ground at the edge of the meadow. It was growing and almost flickering and shimmering - as if with orange lights. The animals ran to see what was happening. It was the monarch butterflies starting their long trek to South America. They had decided they could put on an air show for the picnic if they all left at the same time. They swirled up into the sky like a column of chimney smoke curling up. It rose high up before it spread out into cloud shapes and drifted off into its long journey. All those butterflies leaving at once. What a magical sight the animals had seen.

Squirrel thought again about those long ago dinosaurs. He was pretty sure they could not gather for such a picnic as he and the other woodland animals were having. Squirrel was very glad to live where he did, with lots of friends, plenty enough food, good times with each other, and a chance to catch up with far away friends and family every once in a while. It had been a delightful way to end the summer. Maybe they would do it again the next year. Squirrel could wait until the next year to think about it. Right now he would just enjoy the good time.


Questions/notes to self..
The dinosaur fluke..
Where do red squirrel and black squirrel usually live (habitat),
Where did they come from?
How does the "flying" work?
Ugh I don't want to do research.
Just google it?
What IS a game of leapfrog?

Rockland - Catinka Knoth  will  teach drawing  scenes of September in
Maine, with a focus on buildings, at 11 a.m.  Mondays,  Rockland Public
Library, the Community Room, 80 Union St.  Led by Knoth, participants
will make their own  drawings in color. Knoth offers the  workshops
free and  open to the general public, with materials supplied. Friends
of Rockland Library host. FMI Knoth at 596-0069 or Rockland Library at
594-0310.

Knoth will lead students in drawing several scenes of iconic local
Maine buildings. Students may experience simple aspects of  perspective
theory. They will also practice the technique of coloring in without
using outlines. Familiar buildings from St. George and South Thomaston
along the St. George peninsula and Rte 131 will be the subjects for the
classes. Each week is a different building - a schoolhouse, a barn, a grange, and a classic Maine farmhouse.

Knoth paints watercolors of Maine and whimsical animal scenes, which
she offers as cards and prints. She teaches a free weekly children's
drawing class at Rockland Public Library, sponsored by Wendy and Keith
Wellin.  For more information about Knoth's work visit
www.catinkacards.com. 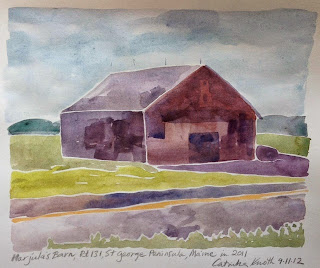 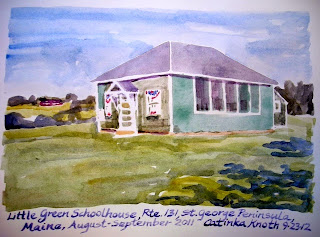 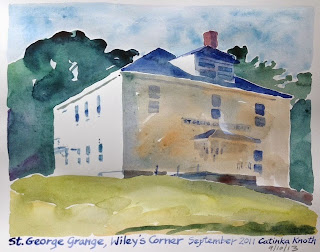 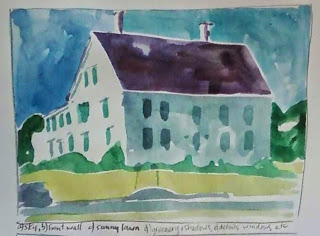 Posted by Catinka Knoth at 5:05 PM No comments: