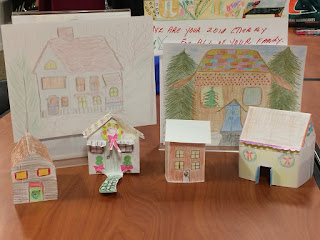 I had a rough idea in my head of how we could make houses of paper to decorate. The plan was to demonstrate the instructions without words - miming and gesturing only. Unfortunately I had apparently forgotten to even announce what the subject would be - or no one had noticed. It wasn't long before people were throwing up their hands and threatening to give up and go home. They did get it through to me that I had not at least given the subject or overview.

I broke down and used limited words. That however gets me all confused. I can't figure out how it should work while simultaneously directing verbally.

Once I said what the subject was, I told class to just make a paper house however they wished. Decorate it of course - before cutting it out and putting it all together. Some ended up so called 'cheating' by making separate roofs. A couple made large house pictures.

The next question was how to take the picture. We did them both on the wall and as a little village setup.

They are so magical. Everyone oohed and aahed and squealed in delight. Someone noted that the lesson that provoked the most 'whining' had ended up pleasing almost everyone the most. It was a hairy ride for awhile though!
Posted by Catinka Knoth at 6:31 PM