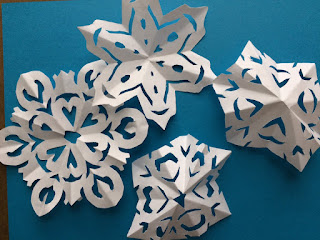 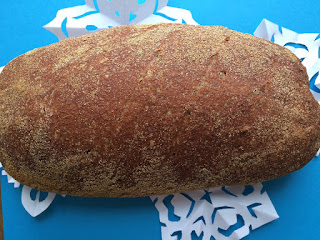 Snowflakes are only for some kind of background for my bread photo. I mixed the ingredients while I made breakfast Sunday morning. It is almost a no-knead but I used less water so I had to do a bit of kneading. Not really - it was just to mix.

Since I did not want to bake that night, (after a 12 hour rising), it got a 24 hour rise. I did punch it down before bed. Unsure whether that would disturb anything. There is so little yeast to start. I guess the yeast grows. The dough ferments or sours during that time too. Monday morning I turned it over onto its baking pan, on parchment paper and some cornmeal, and it nicely formed this loaf shape.

A hot oven, a pan of water on the bottom shelf, then the loaf on its pan with a loose foil tent. After 1/2 hour, I removed the tent, turned down the oven a bit, put more water in the water pan, and baked another 1/2 hour.

Out of the oven and onto a raised surface to cool. (So it won't sweat and loose its crustiness.) This is an all wholewheat flour so it is a very dense loaf, like a peasant bread. Chewy, again like those Westphalian breads. I cut thin slices as I go. I will try a white bread with this method at some point. But yes, you can make bread with straight wholewheat flour. It just won't be light and fluffy.

I am so thrilled to be making bread again, (in loaves). There was a short period years ago when I made bread and tried selling them in my apartment building in NYC, going door to door! That did not last long but I learned from it.

No recipes or methods I have seen use the method I use. Because mine is unmeasured and relies on feel, and recipes nowadays need exact measurements. Mine is an easier mixing process and less messy. Hands don't get goopy even though you use hands to mix, and the mixing vessel is practically clean once the dough is mixed.
Posted by Catinka Knoth at 10:56 AM