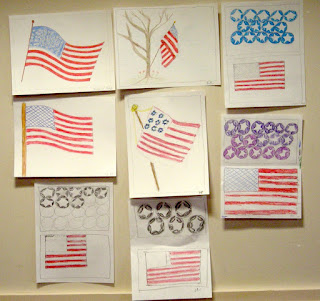 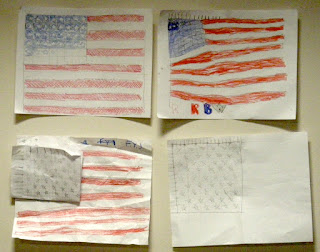 In adult art class, drawing the American Flag,  we did some practice on other ways to depict stars in the canton first. Draw circles and carve out the dark areas to convey the white star figures. We did not draw the stars in the usual line drawing star method. We also did a half sheet practice to get the proportion of the canton, (blue rectangle of starts), and the stripes.

The stars should be 6 across then 5 across continuing until there are 9 rows in all. That equals fifty stars for fifty states. One way to convey this without being detailed, is to draw blue criss-cross lines. That is good for small flags.

Here is Catinka's Live "How to draw American Flag" video, where my little cat toy figure tries to help me draw. So far I keep making these live videos late in the afternoon, evening when the sun is streaming in from the west. I can't see a thing in that lighting. One of these days I'll learn!

Posted by Catinka Knoth at 8:32 PM