September drawings from adult art class in 2016. These are some well-known buildings in St. George Maine along Route 131. Harjula's barn, Robinson's farmhouse, and Wiley's Corner St. George grange.
The barns: we did exercises in coloring somewhat architectural plane shapes - one version is to draw the shape in outline and color it in, the next version is to color it into an imaginary outline. After some practice we worked from the reference photo, Harjula's barn here on Rte 131, in Maine, a previous September's scene. It was an experiment to see what happens if you draw the basics of the barn and scene in black crayon as in the coloring in practice, and then work some color on top of this drawing. It would be a kind of grisaille crayon drawing.
Maine farmhouse: exercises in just coloring in the roof shapes, some like parallelograms and some like odd shaped parallelograms, (trapezoids).
Getting the windows hanging off of a straight line rather than being individual shapes, as if they are laundry except you don't want that line curved. The front face of the house is also an odd shaped 'parallelogram'. The side part of the house - if you look you can see an irregular arrow formed by the attic. Note that the side part of the house looks like  a white irregular arrow.
Drawing the St. George Grange we had some basic perspective lessons. Then we worked from our photo reference, not yet shown here, to depict the actual Grange Hall 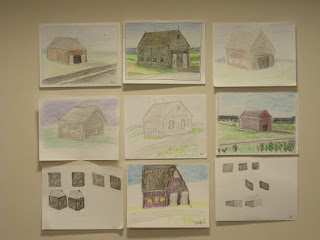 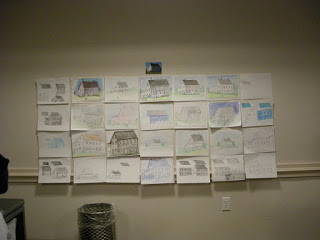 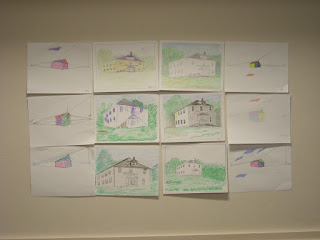