It was Easter morning. Sammy Squirrel had promised his friend Rudy Rabbit he would help him with his Easter delivery rounds. He had really wanted to do this when he promised. But now that the morning was upon him, he just wanted to sit there and muse upon things. To sit and look at the world just around him. To ponder the way of it. To be idle. He loved being idle and being able to daydream. He also loved to rush around and do things. It felt good to get excited and make things happen. The things Sammy Squirrel liked to do, or usually found himself doing, was to find food and either eat it then or find another place to hide it. Usually he would scurry off from where he found the food, dig up a little hole in the ground, put the food in the hole, and cover it over. He kept very busy at this task for most of his day.

One could think it was work. Sammy liked doing this. He could not help but do it. He had to do it. It felt so good to him to do this, it was so easy for him to do. Was it really work?

Often times other animals, like bluejays and crows, followed Sammy Squirrel around as he buried his treasures. They knew what he was doing. As soon as Sammy was done covering one food cache, they would go uncover it and take out the food for themselves. Bluejay might go hide it somewhere else himself. He did not usually bury it in the ground. He just put it in a pile of leaves or old grass and covered it back up. An acorn or nut could get moved around a few times. Perhaps a crow or a seagull would see what the bluejay had done with that nut. Crows and seagulls do not have the patience to bury something themselves. They are bigger and need to eat all the food they can find when they find it. Seagulls are not fussy what they eat..

Seagulls are so gluttonous they will swallow things that are too big for their throats, just so they can eat it before another animal, even another seagull, can get it. And then the seagull squawks around with the lump of food in his throat, while another seagull follows it hollering at it to try to take that food hiding in the other seagull's throat. They squabble and tussle over a bit of food. Anyone watching might worry that the seagull with the food in his throat will get stuck like that.

This also happens along the piers and harbors, where the people set out their fishing lines. A seagull might grab hold of a fish as it is being pulled in on a line, and swallow that fish that is on the end of a line. Now the seagull is on the line too. What happens? How often does this happen?

Here was Sammy Squirrel thinking he did not want to go help Rudy Rabbit. He wanted to daydream about all the acorns and nuts he would find that day and go bury in the lawn that had just started turning green after the long cold winter.

He'd seen where the crocuses were coming through and blooming. That had already started over a week earlier. There had been yet another snowstorm just a few days before, but that did not matter. Sammy knew it would not be long before it got warm and stayed warm. Before there were lots of plants around. Before there was lots of shade because the trees were full of green leaves. Everything would be green. There would be lots of bugs around. The sun would shine a long time on most of the days. In the winter the sun seemed to shine for such a little while every day that it was out. It always felt as if it had hardly come up for the day before it had to disappear again for the night.

That was why it got so cold during that time. It got so cold that there was not much food around. The best someone like Sammy could do was to sleep as long as he could. He would curl up in his leaf nest high up in the tree branches and go to sleep. During this cold weather there was also no good place to hide food if he found it. The ground was too cold. It was so cold it was frozen.

On some winter days it warmed up a bit and the ground thawed a bit. Those were the days that Sammy's friend,  Rory Raccoon, who slept most of the winter time, woke up and came out to look for a snack.

The day had flown by as Sammy Squirrel sat there pondering and  munching on the acorns from the pile he had dug up. He had not gone to help his buddy Rudy Rabbit with his  Easter job. He had seen children running about with Easter baskets on their arms, screeching with glee every time they spied an Easter hunt trophy. Some where cleverly hidden waiting for the older children to find. Some were practically out in the open for the youngest children to find. When they had found all there was to find, they went in their houses to eat their goodies and play with any toys they might also have found. Sammy knew they might also be having a big feast for Easter. Not all families did that though. Lots of kids were fussy about their food and did not even like the foods served at Easter dinner. One child he knew only liked ham and Easter cookies at Easter. Perhaps the fussy eaters were served hamburgers and hotdogs.

Sammy sniffed around at some of the candy wrappers that blew through the grass in the spring breeze. He did not care for chocolate. He could smell some peanut odors  in the wrappers but there were no peanuts with these wrappers.

Cory Crow flew down and picked up the shiny candy wrappers. Cory Crow liked shiny things. He collected the wrappers and took them off to his special treasure cache. He even put some wrappers in his nest. They would make his nest sparkle.

Rudy Rabbit went home to his burrow quite tired from all the work he had done that day, delivering Easter baskets and hiding Easter eggs and treasures around his neighborhood. He felt good that things had gone smoothly, even though Sammy had not come out to help him. Ginger and Jolie Rabbit had helped. Rollie and Renee Rabbit had also.  Other rabbits saw to the Easter deliveries in their own neighborhoods. It had been a satisfying day for them. They did not have to think about it again til the next year. Now they could go back to their daily business. 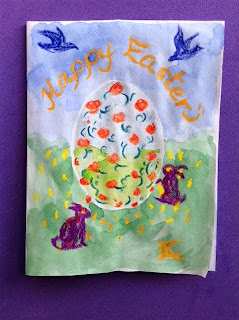