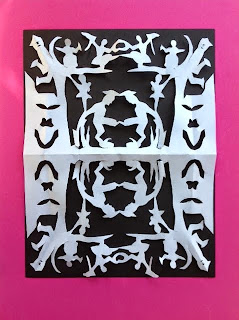 My 'Fairy Tale' papercut inspired by Hans Christian Andersen's papercuts. A freehand double fold doublecut, loosely modeled after one of his cuts. He was a master with them. He did them while telling his stories and gave them as thank-you gifts to his hosts, or their children, wherever he was invited. He was born April 2, 1805, and lived until 1875. He wrote many well known fairy tales such as The Emperor's New Clothes, The Ugly Duckling, The Princess and the Pea, The Little Mermaid, Thumbelina, The Snow Queen, The Little Match Girl, and The Dancing Shoes. Our grandmother, Thyra Dohrenburg, translated several volumes of his writings, fairy tales and a day book, from Danish to German. An article yet for me to read cites her work here:
http://www.andersen.sdu.dk/forskning/konference/tekst.html?id=10914
Posted by Catinka Knoth at 1:45 PM