A friend asked the other day what I might recommend for a young child who had to spend lots of time in travel on a regular basis, over roads with nothing to see. This got me reflecting on my own experiences with art as a young one. 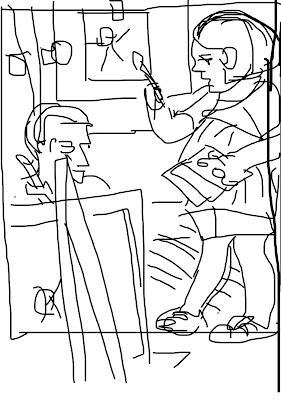 I remember I did drawing and painting alongside my dad as he painted. He would tack paper up onto the closet door and I would paint or draw while he worked on his canvas.

Mostly I think I worked/played with my dolls and toys. I had lots of golden books but I couldn't read yet. My parents read to me a lot, including from a book of Grimms fairytales the original versions. There were no illustrations in it. Each story had an illuminated first initial but that was like an inch by c. an inch. it ***??? wasn't you can see anything in it. The two volume book set is fat and printed in that German Gothic text so I couldn't even recognize any letters. I would just listen to the story as my mom read it.

My parents read to each other a lot too. They'd be reading their magazines and newspapers and then say "here listen to this! "And then proceed to read whatever it was they wanted the other to listen to.

After my dad went back to Germany, my mom continued to work in whatever job she was working at - secretary. And she saved enough money to take a long trip to Mexico. Of course I went with her. It was a three days and three nights greyhound bus trip. I was not drawing during this. I think the bus was too jiggly to be able to draw while riding. I had some books to look at. I think we also just visited with the other bus riders.
Whatever artwork that survived all these years I had done it on newsprint pads some of which was even lined. You know, the bigger lines like for kids. Sometimes I drew in ballpoint pen, (did we even have them yet?), or used regular crayons. I used my dad's set of tempera paint - looks like a watercolor set in a closing tin case. (He left it with me when he returned to Germany…) And I think I had to use his bristle oil painting brushes, which were not good for watery paint. But he was also really good with brush and ink sketching or pen and ink. His father was an artist who did illustrations for the newspapers. Whenever an article was about ****???? and I would like** portrait sketches done really pretty fast in pen and ink. And because the stuff is just for printing it was done on newsprint - it wasn't meant to last.
So I'm not sure I'd recommend anything but play with the dolls or any dolls, any toys, that you have. You know, play pretend and look at books, read them. Drawing should be an extension of playing with toys.
(Voice change..)
You're using drawing and writing as another way to imagine and play in an imaginary world. And it's it's an extension of yourself. The more you need it or use it for that aspect, the more it connects to the core of your being. But if you're using it to create private product you're going to get too judgemental about it and may end up driving yourself so crazy with the pressure of expectations. Even praise often ends up creating pressure. Kids can end up judging themselves too strongly against outer values or performances instead of their own inner desire to do something just for the sake of it.

I always wished for one of those pencil boxes that had a little drawer. I don't think they make them anymore. I never got one. I also really loved those letter writing cases. They opened like a book. Had a place for a large pad of paper, and slots for envelopes, pens, stamps. They closed with a wrap over snap or a zipper. Never got one like that either. My Ginny and Ginnette dolls had a lovely trunk for them and their clothes and accessories. That had a little drawer. But I did not get those dolls til age 6-7.

My Mom and I brought home from Mexico earthenware pottery. Lots of kids dishes. Also the kid/doll size version of a corn grinding stone. And that carved chocolate making tool. …mollinilo

Years later when I was big sister to all my siblings, we'd sit around the table drawing together. But these activities were also influenced by our parents. Our Mom's father and aunt were both very involved in artistic/creative interests. The German aunt had made a picture book of her childhood activities in her home - a copy for me, and a copy for the German cousin about my age.

Once I was in art school and came home, (family had moved to Michigan), to spend Xmas break babysitting them while Mom went to visit in Europe, I got the opportunity to kit out the siblings w some more grown up art supplies. I got them each a 'leatherette' bound sketchbook and an assortment of decent colored pencils - Berol prismacolor.

But they all always liked the bright colored water based markers. Our Mom kept them well supplied in those. The two boys were always drawing maps on those shirt cardboards that came from the cleaners. These were lands and terrains to drive their matchbox cars on, on the floor. They also drew fantastic landscapes and imaginary scenes. They did much more drawing than the girls did. I think our Mom just bought them large pads of drawing paper about the same size as the shirt cardboard. One of the brothers drew lots of cartoons and Rube like contraptions. This however was the brother who died as a young man.
Every kid,(sibling),had their hands in some creative ventures. It was just part of what was assumed kids did. They were never overly praised or paid attention to for what they made. In Montclair they were still quite young. So our Mom was always taping their art from school up on a little wall area in the kitchen.
At the young ages i think it's more important for the art to be an extension of the imaginary/pretend world. A place to play with your characters in - to pretend in.

So what kind of little suitcase/travel case would kids nowadays like for keeping colored pencils and markers? I think I made books back then as Christmas presents for my parents - Ie the Nativity story. But I didn't have a stapler big enough to staple properly. Christmas card making came along because our Mom had discovered one could do fake gold leafing. It was sheets of transfer gilting one burnished off onto your page. She was writing in 'fractur' with special calligraphy dip pen and ink, and then using the fake gilting. I think that started the Christmas card making tradition. (Like doing the cookies at Christmas or eggs for Easter.)
Our Mom also taught me hand sewing, crocheting at a very young age. because she'd had to do it early. Sew an apron to learn sewing. And make a crocheted potholder as a present for whom? I don't know. She had to do it and then I had to. My siblings never got that far.

After rereading this I have kept returning to recent memory of a traveler from England(?), who had an adorable travel painting set. A tiny paint set in a case that opened up to hang on your chest like a tiny easel! Smaller than a cigar box. One side held the papers, the other side had the paint set. Some tricky ways for water and mini brushes too. I don't know the name of this kit, and cannot find it.

So with your question dear friend, I keep googling for this for me! But I may have found some decent options for kids. One kit is canvas type. No idea what the media qualities are. Another kit is Crayola. That quality is ok enough. (It's what I've been using in the kids classes.)
Posted by Catinka Knoth at 12:38 PM