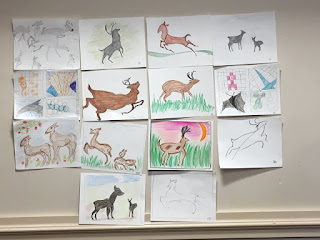 Our references for drawing deer came from the Art of Animal drawing, by Ken Hultgren, a Disney animator who worked on the Bambi movie. We also had a set of old silhouette art to work from

We started with a set of experimental exercises. In four rectangles we drew a series of pre-decided lines. The first rectangle was 13 lines crisscrossing perpendicular, like plaid. The next box
Was 13 diagonals crisscrossing. They touched two edges of the box. The next box was the series of 13 arcs crisscrossing and intersecting at two edges of the box. And finally the last box we drew 13 overlapping circles. Then we went through each box and tried to invent or find a creature or critter. We did them in one color of our choice except not yellow.

You should be able to see the connection between the arcs experiment and Hultgren's drawings. Students made their final drawings as they wished using the reference art of Hultgren.

And then from kids’ class:
What fun to have rainbow colored deer. I want to make one as a color wheel spinner! 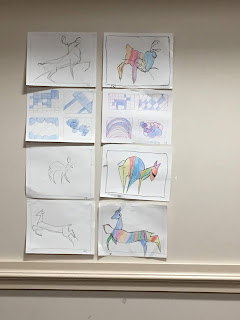 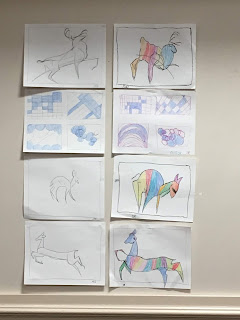 Posted by Catinka Knoth at 9:26 PM