c.  Three  heaping cutlery teaspoons of white flour
Maybe a quarter cup of rolled oats, (?)
A heaping teaspoon, (cutlery), and a half of cornmeal
Some salt and some baking powder, generous sprinkle of cinnamon - amounts that this much flour etc. would need.
Dollop? olive oil, ( EVO).
As much water as is needed to make this into a drop batter – 7 to 8 cutlery teaspoons I think.
Mix the dry ingredients well with a fork
Add the oil and mix that well with a fork
Add the liquid bit by bit quickly so that you’re not developing the gluten. Stir a bit after each splash of liquid.
Grease the pan with butter.  In this case I used a little round ceramic pie plate - I don’t know what it was - it’s about 4 to 5 inches across.
Scrape the battery into it. Pat it down.  Prick holes so that you have six pieces after you’re done baking. That tells you that this is not a very wet batter – because it can keep the prick holes .

Toaster oven set to 400°. Timer to 15 minutes. After 5 minutes, put the cake in. Another 15 minutes when the timer dings. Try to turn the pan around too. Then another 10 minutes. About 35 minutes total.

Turn the cake out of the pan and set it on a rack, or something, to cool. I used a bit of crumpled foil. You  want it raised up so it won’t sweat too much. Once it has cooled a bit, you can further break off along the prick holes for a little piece. It is adorable, and the three little pieces I ate tonight were delicious. We’ll see how it is tomorrow after a night in the fridge. 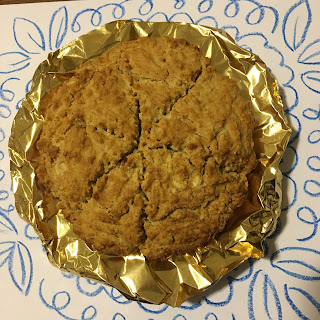 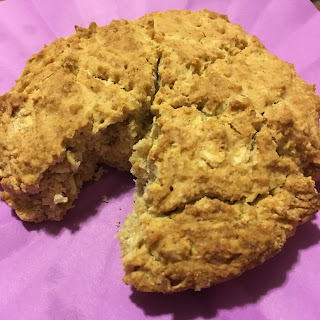