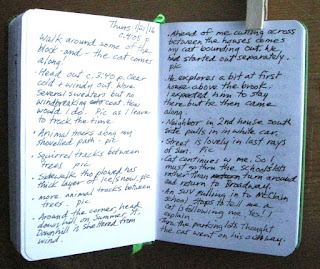 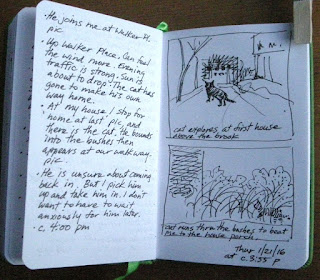 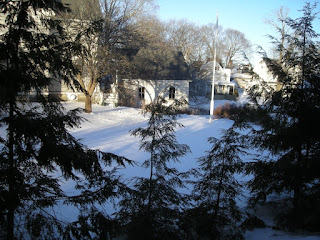 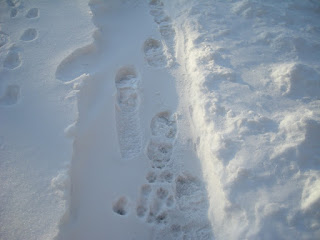 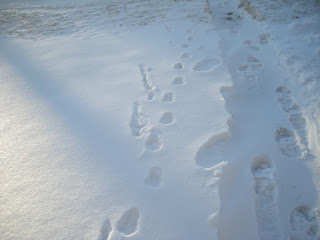 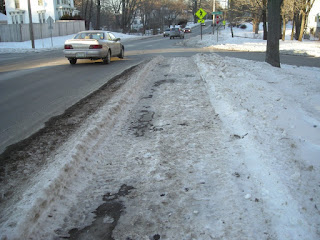 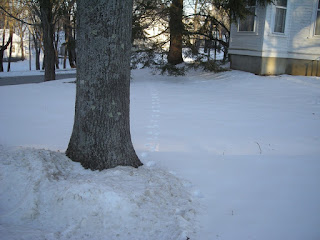 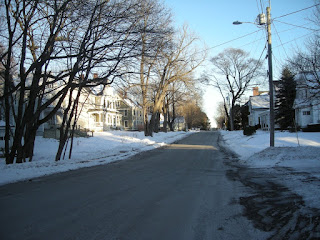 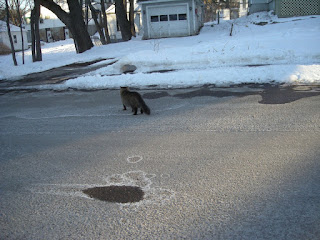 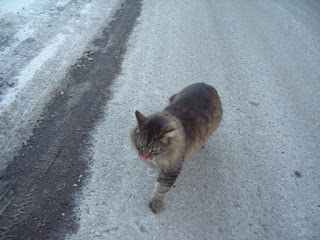 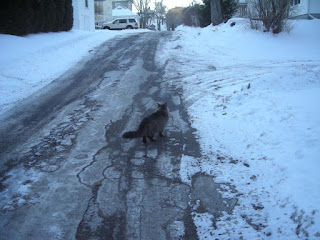 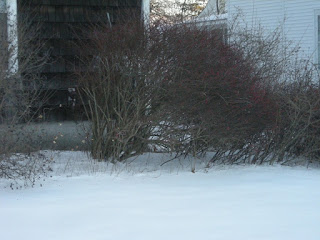 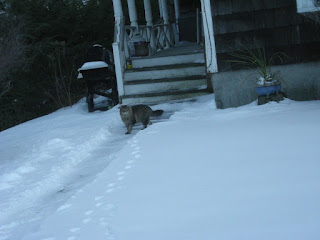 The cat left the house the same time I did to go off on his own as usual. Late afternoon, just before the sun would be setting. It was glorious brilliant cold and still windy day. I had worried over whether I would be ok without a windbreaking coat. Would the several layers of sweaters, scarves and hat be warm enough? My intention was to just walk around the corner as the last time, then return the same way. I took some photos of animal tracks across the snowy lawns, and the condition of the so-called cleared sidewalk. Turned the corner and headed east, down the hill. That blocked the wind a bit.

And then out from between the two houses on the south side, bounded my cat into the middle of the road to greet me. He wandered off to a house on the other side of the road. I assumed he was off to see what was going on around the brook at the corner. I continued on my way. Looked back and saw the cat was coming along with me. I would have to cut thru the upcoming parking lot rather than going back up to the main road as I did not want to have worry about the cat following me along the main road.

In the parking lot, a fellow in an SUV stopped to tell me that a cat was following me. Yes I know... and I told him a bit about the cat.

Maybe the cat would cut home on his own when we reached a spot directly behind our house. No, he kept coming with me.

We would have to get back to the main road eventually. That means a return to traffic and the wind. At least it was only a few houses to walk past. Again I thought the cat might have gone off on his own to make his own way home. But in front of the house I caught sight of  the cat jumping into the bushes in front of the house. I could barely see him in there and tried to catch a photo of him.

He beat me to the house and waited for me at the foot of the porch steps. On the porch he seemed a bit reluctant to come in. He had hardly been out very long for his usual time outside. I brought him in anyway, rather than having to worry about getting him in later.

Home upstairs and wrote up the account of my walk in the notebook, did  my  sketches  from memory  referring to the photos.

Soon after, crows were flocking west over the house to a tree on the other side of the road. They took off again heading overhead back to the east to roost in another tree.