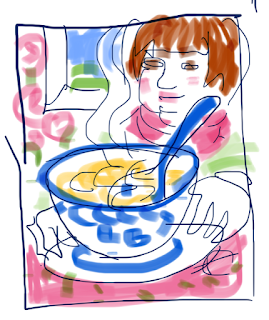 I advised someone to make chicken soup:

".....Yes - that is great if you have the chicken broth. Throw in some spaghetti broken into little bits, or rice, or just over a couple slices toast. Just the canned is good though. If you have any veggies in the freezer that you can throw in there, fine - that's a bonus.

But most important is to have some. It is a comfort that will help."

Well I tried to make some with pasta and broccoli last night - just one serving. I fell asleep at my table while the pot cooked. Just browsing in the computer and listening to a radio talk show, with the voices droning easily knocks me out. When I woke it was late, and then I remembered the poor 'soup', which had long since stopped being a soup. It was not a smoking pot, but had a thick, I assume, black crust underneath. A glue like skin with large holes across the top, then perhaps two inches of empty space until the boiled down mish-mash. I put a couple slices of cheddar cheese on this mess and ate whatever was not burned. Salty and sour. The lemon juice ratio was way off for the quantity this dish had boiled down to. Mustard proportion was way off too. One could hardly tell that the broccoli had been broccoli.
And my little serrated knife has gone missing. I used it last to cut cheese for the 'mess'.
Posted by Catinka Knoth at 11:30 PM