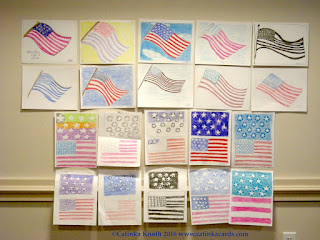 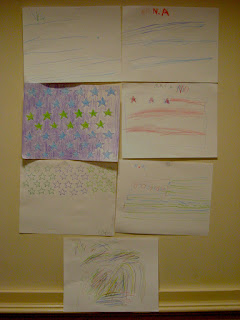 Adult class flags - we did some practices of stars carved out of rows of circles working with the negative spaces. That meant coloring in the background, without drawing the star, to create white stars. Proper star arrangement might come later!.

We did an approximate proportional rough of the flag. Seven red stripes and six white stripes to represent the original thirteen colonies. Remember that the top and bottom stripes must be red. The top four line up with the canton. The overall flag proportions are 1.9. So, length = 1.9 sides.

We could also have made stripes by taping two pencils together, had we thought of it in time!