Making A Valentine - a Crow Story 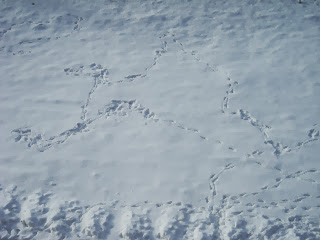 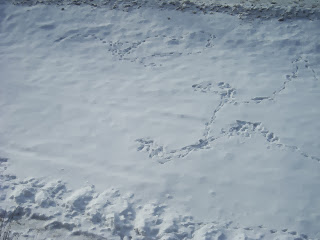 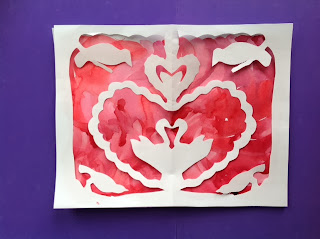 It was Valentine's Day. Cory Crow had heard the lady talking on the
radio program through the open window of the lady who threw out peanuts
for him and his buddies on most days. The radio program lady was
telling people to call in with their special requests for Valentine's
Day music. She was also telling people they could give Valentines to
anyone they thought did something special - give someone a Valentine
surprise she had said. Cory liked her idea. The music had been nice
too. It was mostly all classical music.

Cory wondered what he could do to give a special message for
Valentine's Day and for whom should he do this? He walked around in a
circle on the snow in the yard as he thought about his question. He had
just come back to where he'd started walking. There were footprints in
front of him now. At first he wondered who else was around him. He did
not see any of his friends around. It was just him. Those were his
footprints.

He flew up into the tree where he could see his footprints better. That
was a pretty good circle he had made. He knew what a heart looked like.
Could he make footprints that made a heart shape? He flew back down
where he could try it out in an unmarked area of snow. He wanted to
start at the top center of one wing, walk around and down to the point
of the heart he would make, and then walk up and around the other wing
or side of the heart to end up back at the top center. He would have to
walk an imaginary line. He did not know how he could keep the two sides
of the heart even looking. He might just have to hope for the best on
that one. Would it really matter that much if the heart was lopsided?
He just wanted his footprints to look something like a heart. He would
be happy if he could do that.

Cory set about making his heart for Valentine's Day. After he had made
about twenty footprints, he flew up in the tree where he could have a
look at his work. There was not enough to see anything yet. He went
back down to lay down more footprints. Another twenty and he flew up
into the tree to look down. Now he could see that he had interrupted
his line of footprints by stopping to have a look from the tree. The
line interruption made the heart edge look a bit broken and uneven. He
would have to just keep walking without stopping to check on it until
he got back to the center. Then the heart would be finished.

Sonya Squirrel saw him walking around the yard and came over to ask him
what he was doing. She was heading right over and was about to cross
his path with her own footprints. He saw her. Stop! I'm making a heart
design for Valentine's Day. You can do it too. Then we can have two
hearts in the snow. You can even have your heart mingle with mine.

Sonya liked that and started walking a heart that criss-crossed Cory's
heart. Billie Bluejay saw Sonya and Cory walking in the snow and called
out to them. Why are you two walking around over here when there are
peanuts out back? We're making hearts for Valentine's Day! You can make
one too. You can add a heart to our heart chain or you can make a
bigger heart around one of these hearts or a smaller one inside one of
them. Billie decided he would walk around the inside of Cory's heart.

Stevie Squirrel, Beliza BlueJay, and Carmen Crow saw the others at work
with their heart walking. They came over and added their own paths of
footprints to the hearts in the snow. When they'd done, they all went
up into the tree to admire the big Valentine they had made together.
Beautiful.

The lady looked out of her window and saw the beautiful Valentine heart
design in the snowy yard below. She was amazed to see it. She was
amazed anyway whenever she saw any of the animal footprints. To her
they always made such pretty patterns before they got covered over and
over again with lots of footprints. What a lovely Valentine's Day this
was to be able to see such magic in the yard.